I must say that summer is a glorious thing. Even when it is filled to the brim with activity, it can feel like such a welcome change from the rest of the year. I feel very blessed to be on summer holidays right now. It seems hard to believe that the first month of holidays is already almost over. Time has been flying by.

I have done many wonderful things in my holidays so far.

I have enjoyed having more time to just do fun things with Ricky- watch a movie or go biking or roast hot dogs or play Spikeball in the park. 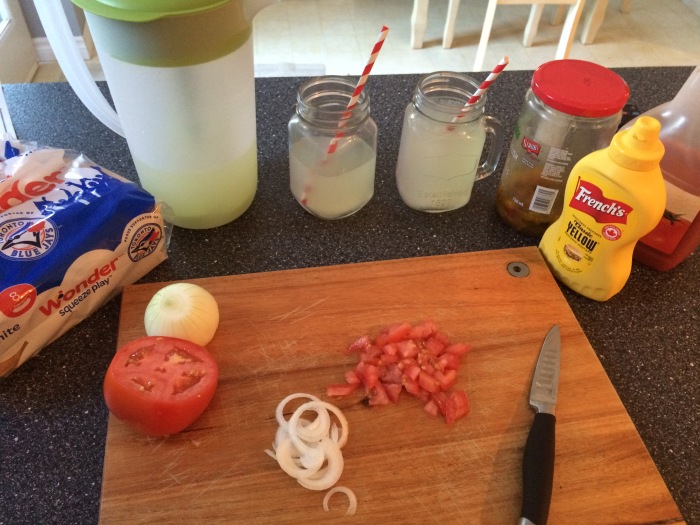 I got to attend the weddings of two of my best friends. It was beautiful to see them so happy. I do need to work on my wedding photography skills though. These are pretty much the only pictures I took of the brides. They were truly beautiful brides. (They are truly beautiful every day.) 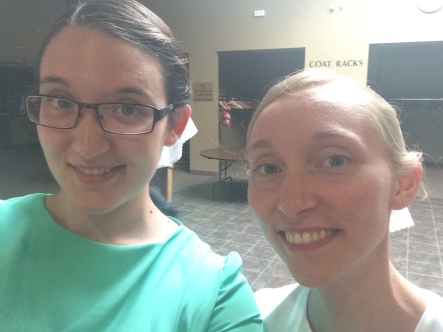 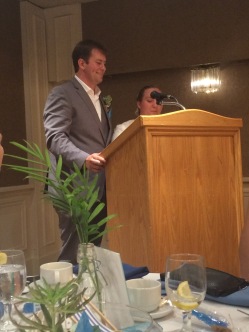 I also got to spend a week in the States with Ricky’s Schrock family. This was a lot of fun and much less nerve-wracking than I thought it might be. We played lots of Spikeball, watched fireworks, and shot some guns at targets. It was pretty awesome.

I loved spending a Saturday morning with my friend Meghan who came home from Faith Builders for a little while. Sitting by beautiful dark water with her and discussing everything that she is learning and thinking was a very refreshing experience. Also, we may have found the world’s tiniest toad. 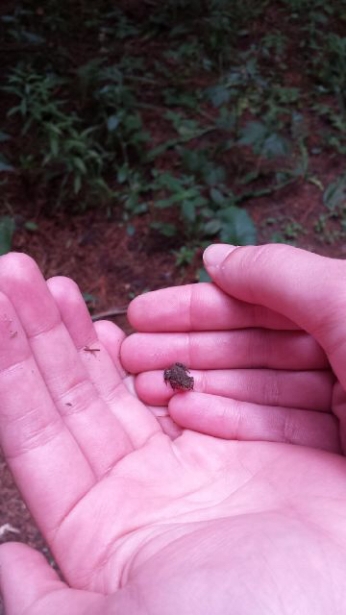 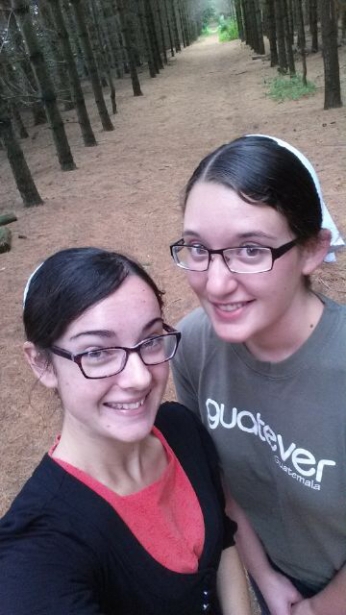 We call this place “The Passage of Time”.

I got to teach Bible school and enjoyed working with younger students again. I also enjoyed the time that I got to spend driving there and back with my little sister Wendy.

All in all, this summer has been wonderfully busy and simple.

Another thing that I have enjoyed about this summer is that it finally feels like things are settling down enough for me to spend some time doing house-wifey sorts of things: jam-making, cleaning, sewing, and cooking.

One thing that I made recently is this soup: 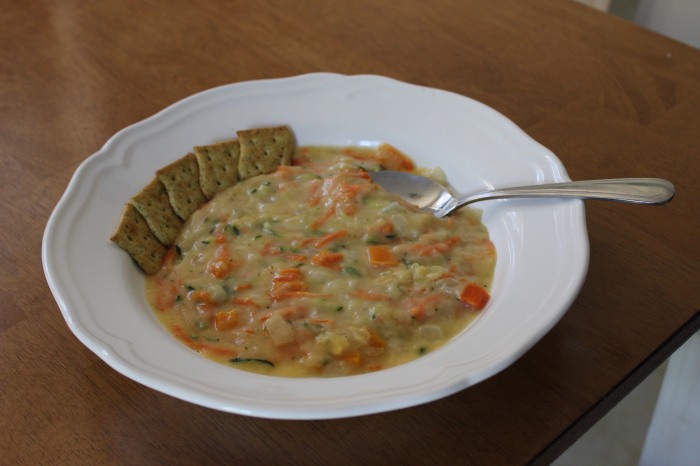 The website that the recipe was on called it “Creamy Zucchini and Carrot Soup”, but I prefer to think of it as “Super Simple Summer Soup”.

I call that because for one thing, it was very simple to make. I didn’t have enough milk (it seems that we are always either running out of milk or trying to use it up because we have too much), so I put extra chicken broth and a bit of water in instead of a full two cups of milk. I also added a few some seasonings, and could probably have added a bit more than I did. I threw peppers in there too, and they were delicious. I have the feeling that you could toss as many vegetables in there as you want to, and it would only get better and better.

The word summer is in the title because it strikes me as being a somewhat summery soup. It was light and delicious and full of veggies. The zucchini is so wonderful in here. I am so glad that I remembered that zucchini exists. (I frequently forget about the existence of some foods, and get quite excited when I remember them. Squash. Sweet potatoes. Cabbage. These have all been forgotten vegetables at some point.)

Here is the link for the recipe: http://www.hoteatsandcoolreads.com/2014/03/creamy-zucchini-and-carrot-soup-recipe.html 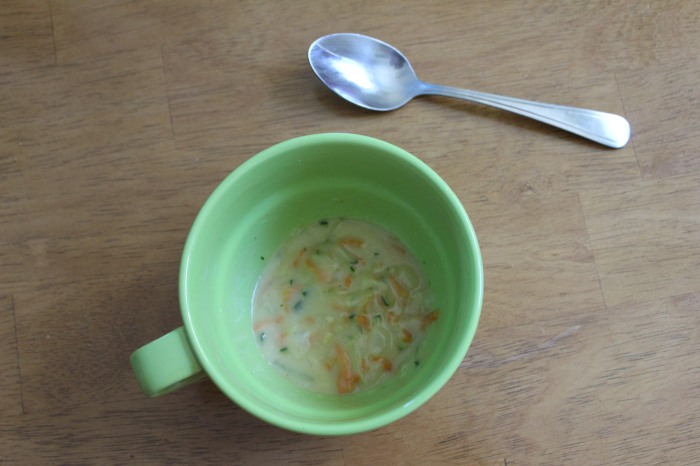 The thing about pain is that it is hard to hold on to. You just can’t get a good grasp on it.

It reminds me of trying to carry a load of “whites” to the washing machine without the use of a basket. Does anyone else know what I mean? Your laundry baskets are either far away or full of other clothes, and so you think, “I’ll just carry this gigantic load of socks and underwear and various other small, sort of slippery articles of clothing to the washing machine. It shall only take a mere moment of my time.”

So you valiantly pick up your load and try to wrap it around itself in an attempt to turn it into a self-contained bundle. But as soon as you have one stray end under control, another sock falls. When you bend to retrieve that sock, three more items fall. All of this results in a frustrated-but still slightly optimistic- shuffle to the washing machine, followed by a “walk of shame” to snatch up the trail of clothing you left behind you.

Pain is a difficult load to carry. Just when you think that you’ve got it all under control, something else falls. You’re falling apart. Whether your pain stems from grief, rejection, failure, or disappointment- it tugs at your soul and makes you feel lost. It could easily steal your identity. Everything negative that happens to you feels personal, because your eyes have been coloured with pain. 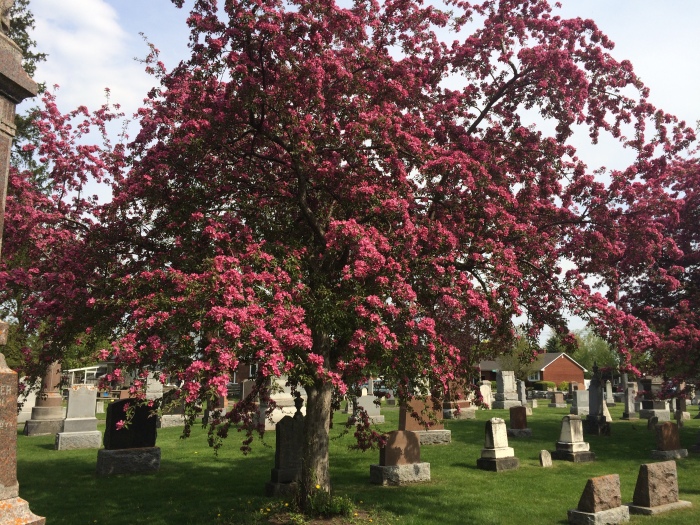 Pain makes it difficult to believe that God chose to create you.

It aches to think about how, at the beginning of time, he looked into the future and felt that you were necessary.

He smiled as he wrote your name down in his book. He so anticipated the forming of your body.

He created Adam first. Summoned the dust. Released his very own breath into Adam’s body. It was a glorious moment.

But his creation of you was just as glorious. He breathed you to life just like he did to Adam. He filled you with himself- placed eternity in your heart. He felt that you were necessary.

“Welcome.” He whispered it to you before anyone else did. Before anyone else even knew that you existed, he cradled you. It was you and him at the very beginning of your existence. It is still that way today. It will be that way at the end of time as we know it.

So he sent one.

God knew that you were going to hurt, and he provided a healer for you.

If pain is a slippery load of laundry, then God is the laundry basket. (That sounds less than poetic.) I just mean that he can handle your pain. Your loose ends aren’t too much for him. You will be scarred, wiser, and holier for having felt pain and allowing God to tuck in your loose ends and wrap you up in himself.  He will carry you through, and you will arrive safely.

“…he disciplines us for our own good, that we may share his holiness. For the moment all discipline seems painful rather than pleasant, but later it yields the peaceful fruit of righteousness to those who have been trained by it.” (Hebrews 12:10-11) 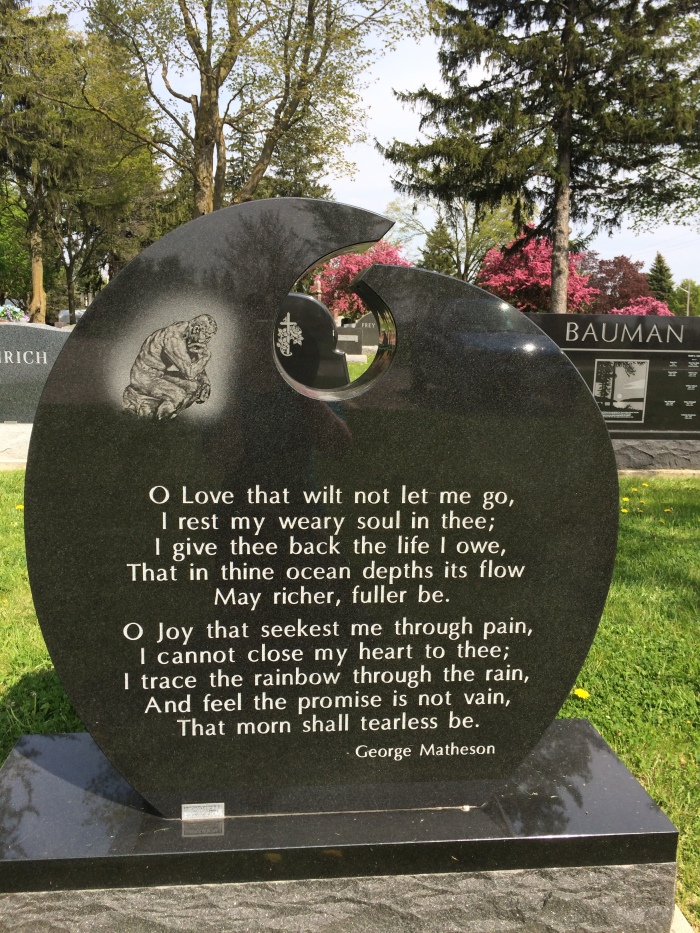