Today was my last day at Hillcrest.

I thought that this would feel much happier than it does.

I didn’t expect the sadness to be equal to the happiness. And when the sadness and happiness are equal, they cancel eachother out, and I am just kind of left feeling nothing in a time where I expected to be feeling everything. I was so excited about coming home today and throwing away all the old stuff that I will never use now that I am not a Hillcrest baker anymore. The dresses and aprons with oil soaked into them (you can actually feel it when you touch them) and stains on them, the veil with the blueberry pie filling stain, the crocs that are almost worn through, the backpack that is falling apart, the bag that I would put my crocs in when I wore boots to walk to work…. Throwing these things away was supposed to be kind of a triumphant, satisfying moment. But I have not yet brought myself to throw these things away. I just don’t quite want to admit that this part of my life is over. I realize that part of the reason that I feel so kindly towards my job right now is because I am full of warm, glowy feelings, from all of the nice things people said when I finished work today. My bosses even gave me a going away gift! Marlene and I schputted (I don’t know how to spell that. German isn’t a written language anyways.) all morning, and I made a smiley face out of raisins on top of one of my muffins and it even had eyebrows. And Marlene asked if I was making sure to put ten raisins in each muffin, and I said that I thought we were supposed to have 11 in each muffin, and she said that that muffin only has 9, and it was funny because we just stick raisins in the muffins. We certainly never take time to count them. Florence and Marlene and I had a race to see who could finish the job that they were currently working on first, and the winner got to make the peanut butter granola. Thankfully, I didn’t win. Margaret won. And she wasn’t even racing! Eva and I talked more than normal. The new girl asked so many questions, and it annoyed me because I just wanted to enjoy my last day, and do all the jobs I normally do.

But last night, I prayed, and asked God if he would maybe consider giving me a beautiful morning for my last bike ride to work as a baker. And he did. It was a blue, bright sky. As Marlene put it, “Five o’clock looked more like six o’clock.” Maybe I will soon start to feel happier about this. I guess I was just expecting some feeling of great relief when I walked out that door. And instead, I just felt like crying because of how nice everyone was and how I’m going to miss them all, and how scared I am about the future (why would one leave such a good job behind? What kind of stupidity is this, anyways?), and how I finally started to like making muffins and loaves.

Is nothing in life ever simple?

The thing about it is that it is just so permanent. I’ve written about this before. (http://autumnbennet.blogspot.com/2012/10/permanence.html) But you see, that was before I really realized how long it takes you to adjust to the absence of a person who has always been there.

I don’t know a whole lot about death, to be honest. I haven’t had a whole lot of experience with it. Grandparents have died, and that’s sad, but certainly not death at its most tragic. Even since I sat down to write this, my thoughts on death have changed. The very first thing that I said was that death is permanent.

Well, I changed my mind. I was wrong. It’s not.

Death is just the thing that gets us from life to God. It’s just a term to define the moment when we become immortal. But to us, it feels permanent. The separation is new and awful and it will never end, until we do. And since we are human, and have trouble grasping the concept of life that goes on and on and on… the ending of ourselves seems scary, and we find ourselves dancing between wanting the end for some reasons and not ready for the end for other reasons.

This separation that happens when a person disappears from your life… the gap feels wide, and it’s hard to believe that it will ever be crossed. You fully believe that it will be. It just seems as though the crossing will take place far in the future, and the thought of living with that separation, the constant emptiness where that person used to be, hurts.

It’s not so bad if you don’t think about their absence too much.

The problem is that you are so used to having them there that you automatically think of them. You may find yourself driving home on the expressway, your mind occupied with many things. And then you see the Victoria Street exit, and don’t have time to stop yourself from thinking “Hey! I could drop by her house!”. And you remember many different things about her and her house… it’s been a long time since you’ve driven that route. You remember how, as you’re leaving the town, if you look to the left, you will see Kitchener lit up and alive.

“I should tell her this” turns into “I wish I had told her that.”

But the truth is reliable and awesome and unchangeable and not meant to be abandoned. Truth was given to us for a reason. To comfort us, to encourage us, to inspire us, to make us stronger than we ever could be on our own.

“For this perishable body must put on the imperishable, and this mortal body must put on immortality, then shall come to pass the saying that is written: ‘Death is swallowed up in victory. O death, where is your victory? O death, where is your sting?’ The sting of death is sin, and the power of sin is the law. But thanks be to God, who gives us the victory through our Lord Jesus Christ. Therefore, my beloved brothers, be steadfast, immovable, always abounding in the work of the Lord, knowing that in the Lord your labor is not in vain.”

Last Sunday, Trish and I took pictures with apple blossoms. Tory took the pictures for us… she did a wonderful job. =) I think my camera liked her. Maybe even more than it likes me! 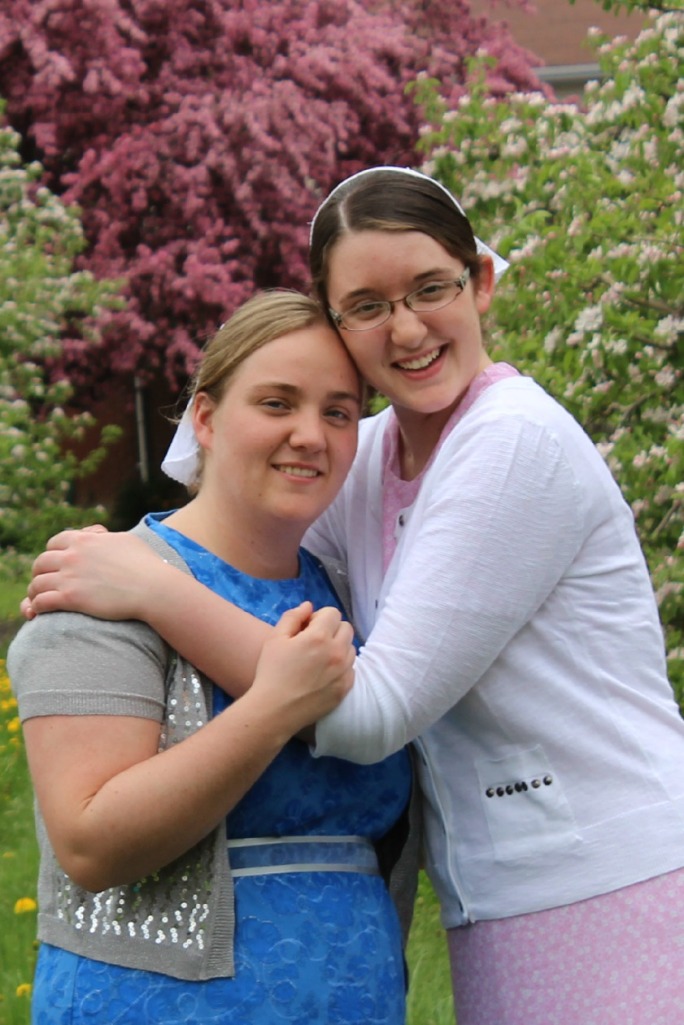 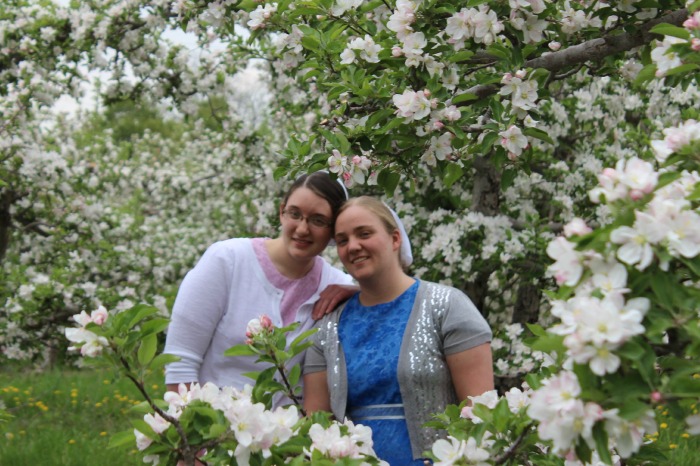 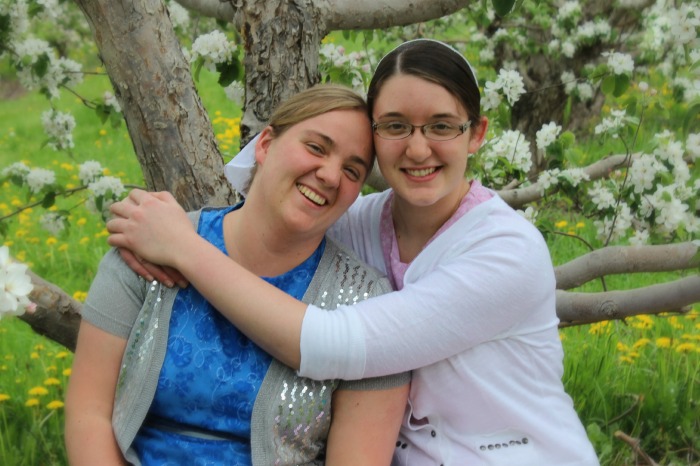 And the other time I took pictures was with Megga when we celebrated her 19th birthday. So here is Meg… being all 19 and cute. I don’t know how she does it so well! But she does. She may be the best at being 19. 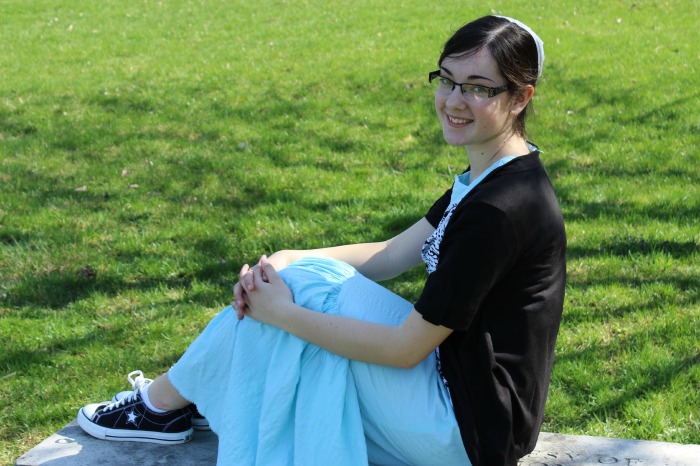 One time at work, I walked around a corner just in time to witness a wonderful moment. You see, we make blueberry pies. And we also make elderberry pies. And blueberry pie filling and elderberry pie filling have the tendency to look a lot alike once the pies are baked. So in order to  be able to tell the two apart, we always put a little square of dough in the center of the blueberry pies, and leave the elderberry pies unmarked. It is a brilliant system. So one day, I walked around the corner just in time to witness Amber fishing a little square of dough off of an elderberry pie and saying “No, no, little guy. You’ve got it all wrong!” (Obviously I mocked her about the fact that she was talking to a piece of dough.)

But the other day, I realized something.

And it truly felt like God was fishing me out of all my confusion and my ideas of how I should be and my attempts to impress others and my failures and saying, “No, no, little girl. You’ve got it all wrong.” He said it nicely. Very gently.

This explains some things.

Like why I’ve felt so overwhelmed and like I will never be able to love God as much as others do.

It’s because I haven’t been inviting God into my life. I’ve been trying to do all the right stuff (motivated once again by wanting to impress others, and obviously falling flat on my face time after time).

No wonder it all felt useless and hopeless and overwhelming.

Sometimes I can be so dense.

So this little guy has been hanging around outside my window for the past week or so. I have grown rather fond of him. I even gave him a name!

This morning when I opened my blind, there were two little birds out there hopping around on my laundry room roof. One was Olly. And one was really fat and fluffy and cute, and so I named her Olivia. But I don’t have any pictures of them together. 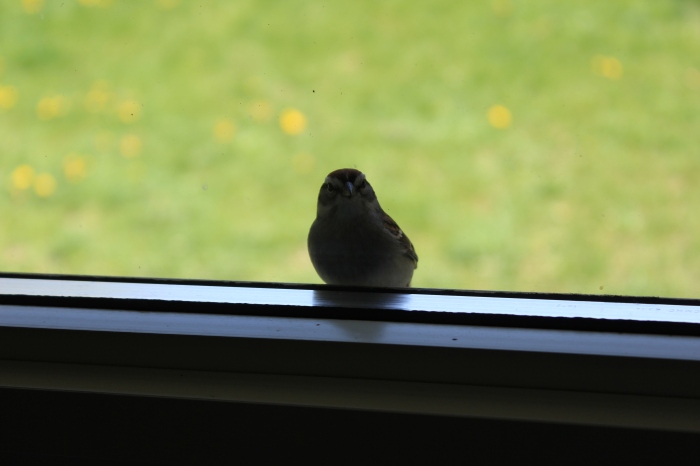 Every single thing he does is just really cute. 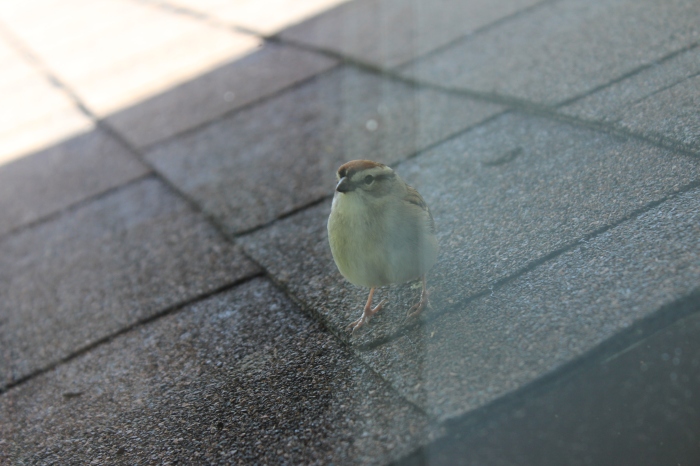 And he doesn’t even seem scared of me. Except that the other day, I did go outside to see if I could catch him… and he didn’t seem to be a huge fan of being caught.

I have the cutest bird.

See, the wonderful thing about waiting to do an end-of-month post until you are into the next month is that you collect a lot of things to write about in that post, because it kind of just feels like one big long month, since I never officially ended April.

You also collect a ton of photos.

Especially if there is nice weather.

I always put the pictures that I want to use in my blog posts in a certain folder, and over the past few weeks, I’ve just been slowly adding to my AprilMay folder, and today when I looked at it I noticed that I had 286 pictures in there. (I hadn’t sorted through them officially yet… there’s some that should be deleted and some that are a lot alike because my camera can take pictures so quickly, and makes such a cool sound, that it’s very easy to take many pictures of exactly the same thing.)

And that wasn’t even all the pictures that I wanted to put in there.

So clearly, something had to be done about this, and the solution was not one very long blog post, because I don’t actually want to sit around and wait for my very slow internet to upload all those pictures. I guess I decided to break it up a bit, due to the fact that some of the pictures are just… pictures. They don’t really have anything to do with something that I did in April or May. They were just kind of separate moments that I probably wouldn’t even remember if I hadn’t taken pictures. I don’t even have a whole lot to say about them, because there just isn’t much to be said about them. That is how insignificant these moments are.

Except that I kind of love all of them, even if they weren’t big or important.

Today’s pictures are an observation of Wendy and Owen eating Freezies. Judging by their expressions in all the pictures… it must be harder than it looks.

Really, I just wanted some pictures of cute kids with their Freezies. But I suppose these will do. 🙂 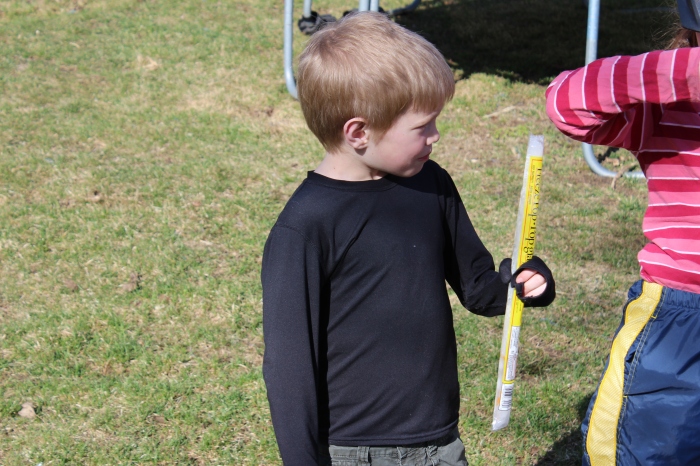 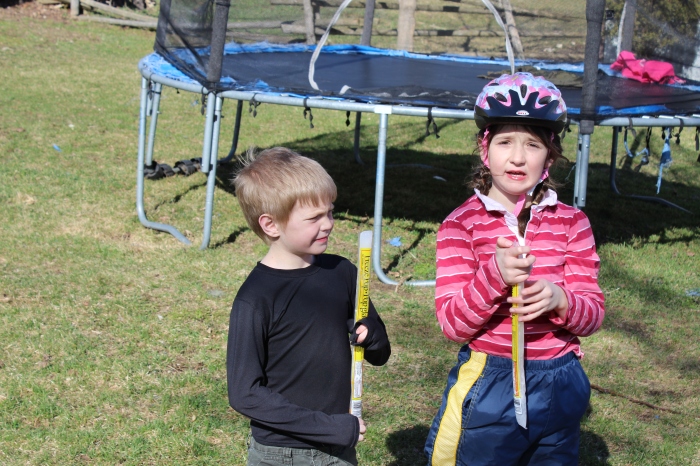 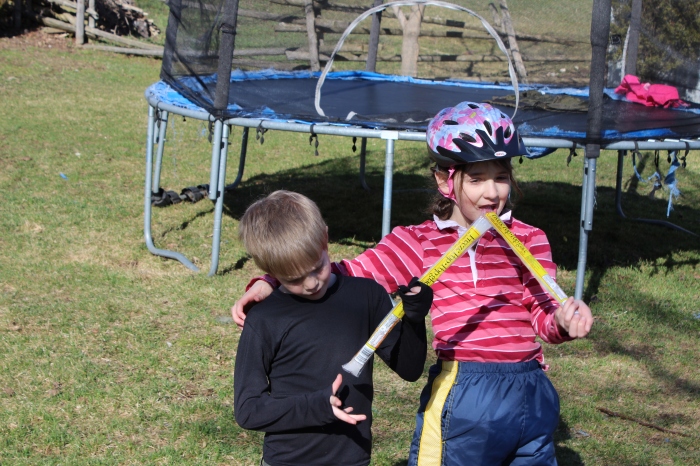